St. Ansgar’s Lutheran Church began ministry in the Salinas Valley as a mission congregation of the Church of Denmark. Founded by Pastor Adam Dan in 1880, it began with the name Den Danske Evangelisk Lutherske Menighed i Salinas Valley. Pastor Dan [1848-1931] was a very busy man as he also began congregations at the same time in Watsonville (Lutheran Community Church) and in Chualar. Pastor Dan was one of the founders pastors of the Kirkelig Missionsforening, later known as The Danish Lutheran Church, serving as its first president.

At the turn of the century the congregation became a member of The Danish Evangelical Lutheran Church in America. No longer a mission congregation, it was now becoming American. Although it’s national body was officially an American Church, the congregation and synod were still thoroughly Danish. Worship, study, and nearly all ministry was conducted in the Danish language.

In 1942 The Danish Evangelical Lutheran Church in Salinas adopted a new name: St. Ansgar’s Lutheran Church. English was now the main language used in worship and education; Danish used for one worship service a month, and anytime there was a “fifth” Sunday.

In 1957 the city of Salinas decided they wanted the property that the congregation had used for worship and education for the past 55 years. Their plan was to make it a civic center. The congregation moved to a new property on San Joaquin Street “out in the country” of south Salinas. Ground was broken in May 1958 and the first worship service in the new sanctuary took place on December 14, 1958. Pastor Paul Nussel served the congregation as their pastor during this massive time of change.

More times of change lay ahead. During the ministry of Pastor T. Duane Jensen [1969-1978] the Charismatic Renewal had a powerful impact, not only on the members of St. Ansgar’s, but in many lives in the Salinas Valley. With a refreshed and growing love for the Lord Jesus, people began to fall in love with His Word. A deeper appreciation for the Bible was evident in the preaching, teaching and ministry through the people of St. Ansgar’s.

There also grew in the congregation a new passion for world mission. The members of St. Ansgar’s have sensed the call of God to GO with the “GO”spel. More than 50 nations have been touched by the membership as they, for varying amounts of time, have left the comfort of home and family and taken the good news of Jesus to different lands and cultures. Currently, if you connect to our missions page you can see, we support 6 families associated with our congregation.

In 1962 the AELC merged with other ethnic Lutheran bodies to become The Lutheran Church in America [LCA]. During that time of change there was a realization that the Synod was going in a direction different than that of the congregation. The years would reveal that divergence more clearly as that discomfort continued to grow within the congregation.

In 1988, with the planned extinction of the LCA, St. Ansgar’s becomes a member of The Evangelical Lutheran Church in America [ELCA]. 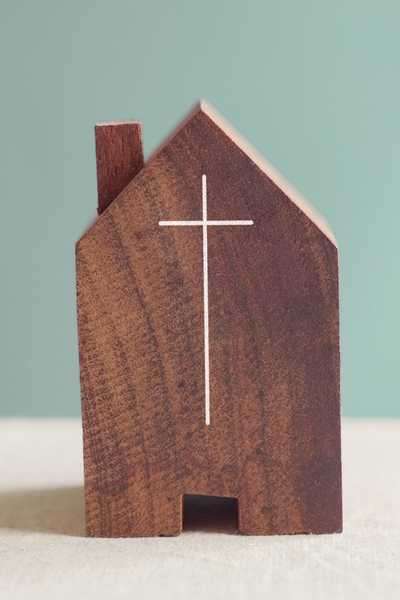 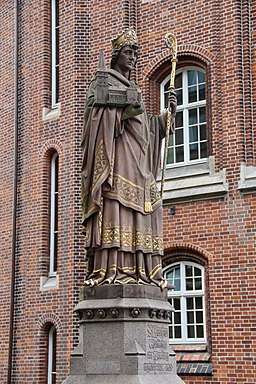 The History of St. Ansgar

Ansgar was born in 801 to a noble family near Corbey, France [about 75 miles north of Paris]. His father worked in the service of Louis the Pious, (son of Charlemagne). When he was only five years old his mother, a godly woman, died and his father placed him in the monastery school run by the Dominican Monks.

When Ansgar turned 12 years old he decided to wear his hair like a monk and told his friends he wanted to become a monk and then a pastor. Three years later he began to teach the younger children in the school and eventually fulfilled a part of his dream, he became a monk.

On the German Frontier

At the age of 21 Ansgar left France to teach in the town of New Corbey in central Germany. He soon became the principal of the school and then the pastor of the town Church. New Corbey was on the frontier, where the “Berserkers” and other Norsemen came to harass the inhabitants of the area.

A Missionary to Denmark

It so happened that King Harold Klak of Denmark had lost his kingdom and requested help from Emperor Louis the Pious. Seeking someone to go with King Harold to help regain his kingdom, Pastor Ansgar volunteered. His heart’s desire was to preach the Gospel to the Berserkers. He accompanied King Harold to Denmark when the exiled King returned to his native land and engaged in missionary work there.

A Call to Sweden

Ansgar’s success in Denmark caused King Bjorn of Sweden to invite him to that country, and there he built the first Christian Church in Sweden. Pastor Ansgar became Abbot of New Corbie and first Archbishop of Hamburg about 831, and Pope Gregory IV appointed him Legate to the Scandinavian countries. He labored at his missionary works for the next fourteen years but saw all he had accomplished destroyed when invading pagan Norsemen in 845 destroyed Hamburg and overran the Scandinavian countries, which lapsed into paganism.

A New Title and Return to Missionary Life

Archbishop Ansgar was then appointed first Archbishop of Bremen about 848, and the See was united with that of Hamburg by Pope Nicholas I. Ansgar again returned to Denmark and Sweden in 854 and resumed his missionary activities, converting Erik, King of Jutland.

“The Apostle of the North”

St. Ansgar’s success was due to his great preaching ability, the austerity and holiness of his life, and the miracles he is reputed to have performed. Though called “the Apostle of the North” and the first Christian missionary in Scandinavia, the whole area lapsed into paganism again after his death at Bremen on February 3rd.

Because of his work to bring the Gospel to Denmark and Sweden, the Christians of those nations have especially appreciated him and honored his memory by naming churches, schools and even towns after him.

We’d love to visit with you! If you’d like to meet with Pastor Vandenbos or learn more about our beliefs over coffee, please let us know.

We’d Love to Meet You!